R-Multiple VS Reward/Risk And More

R-Multiple VS Reward/Risk And More

The Reward-Risk ratio and the R-multiple are two commonly used concepts in trading when talking about performance, risk and trade management. Although the two concepts are very similar, there are some subtle differences. Understanding how to interpret and use the two statistics can help you make much better trading decisions.

What is the Reward-Risk Ratio?

Most traders only look at their planned Reward-Risk ratio (RRR), which is the ratio you receive when entering a trade. Although the planned RRR gives you a good indication of the trade potential, it misses the dynamic concept of the RRR and it does not tell you much about the outcome of your trade.

The best way to use the planned RRR is as an expectancy filter. Let us assume that the historical winrate of your system is 50% – what does that mean for your RRR? A winrate of 50% means that your average RRR has to be at least 1:1 to break-even. A system with a winrate of 40% requires a RRR of 1.5:1 to break even. If you know that your winrate is 50%, you avoid all trades that have a reward:risk ratio of 1:1 or smaller.

What is R multiple?

The R-multiple is similar to the RRR, but it is a performance measurement. The R-multiple describes your trades as a function of the stop loss distance: R-multiple stands for Risk-multiple. Traders who use the R-multiple talk about their trades using the term “R”.

Let’s come back to the previous example.

However, the R-multiple really becomes important when talking about the final outcome of your trades. When the trade from our example is closed for a loss at the initial stop loss, the outcome of the trade is -1R ($10 = 1R) and a winning trade, closed at the initial take profit, is worth +2R ($20 = 2R).

An R-multiple smaller than -1R tells you that you have widened your stop loss and realized a larger loss than initially planned. An R-multiple between 0 and -1R shows that you have cut your loser early. Thus, comparing the initial RRR and the finalized R-multiple can tell you a lot about your performance already. 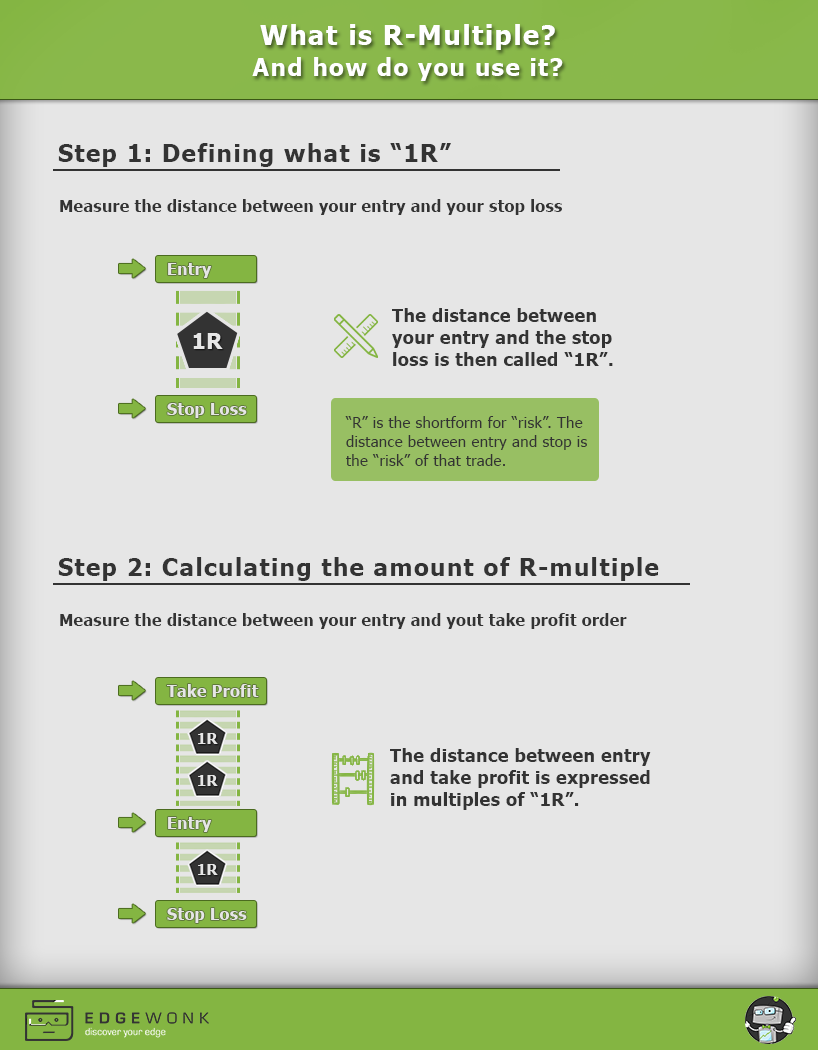 In Edgewonk, the “traffic lights” tell you immediately if your trade is above or below the RRR threshold. When you see a red light for the initial RRR (PCP) it indicates that your RRR is too small for your current winrate. A green light tells you that your RRR is large enough to provide a positive expectancy over time.

The Performance Tables have two columns for RRR and R-multiple. You can use the Edgewonk filters at the top to analyze your performance and see how those two metrics change. If you can see large differences between the RRR and the R-multiple, or larger negative R-multiples, you should investigate further to find out why you are managing your trades in ineffective ways.

Back to: Edgewonk Trader Development > Risk and money management