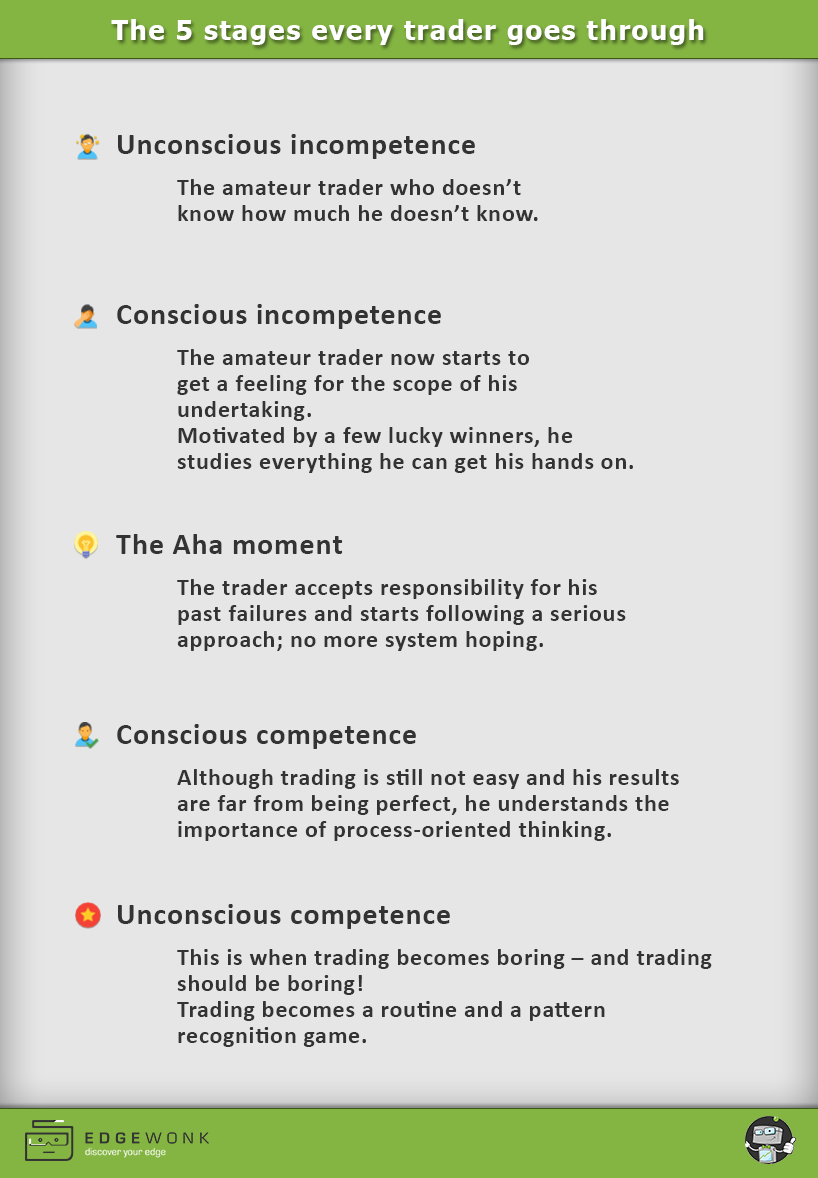 We have followed thousands of traders over the years and noticed that they almost all go through the exact same 5 stages. In psychology, it’s often referred to as the “conscious competence ladder” and it applies to trading as well.

Understanding at which stage you are right now can help you make the next step more easily and help you avoid the most common mistakes.

This is the initial phase of a novice trader when he is just getting his feet wet in the markets. At that stage, a trader doesn’t know how much he doesn’t know, which can often be a liberating, but dangerous place to be in because the dangers are not obvious to him.

His trading decisions are pretty much still a gamble and not backed by a sophisticated decision-making process; although the unconscious incompetent trader will never admit that – he doesn’t know any better yet.

A few characteristics of the unconscious incompetent trader:

At this stage, the traders with beginner’s luck are more likely to keep going and make it to the next stage. Often, however, traders lose money, get easily discouraged and acknowledge that trading isn’t as easy as clicking a mouse.

Here it’s important to understand that you are just getting started and that not knowing a lot is totally OK. Your focus should be on learning the basics and trying not to lose too much money.

Now it dawns on the trader how little he knows and he starts to understand that he has to put in the work and study more. Motivated by a few lucky winners, he studies everything he can get his hands on.

A trader who still loses money consistently, even after spending a lot of time learning about trading, will often start blaming his tools, the wrong indicators, missing information or unfair markets; he is looking for external excuses to justify the losses, instead of looking inside and how he could better himself.

This stage of conscious incompetence is the one that usually lasts the longest. Some traders will never leave this stage, even after years of being involved in the markets. A few principles and questions that can make you aware of potential problems in your trading mindset and general approach:

Sit down and try to answer these questions. Be honest with yourself even if the truth hurts. Lying to yourself will keep you trapped in your current state and you won’t be able to improve and evolve as a trader.

It sounds cliché but this is the time when the trader accepts responsibility for his actions. He understands that all his past mistakes and false behavior will not get him anywhere. And, more importantly, he realizes that his past failure was not the fault of his system but, HE was the reason for his losses. 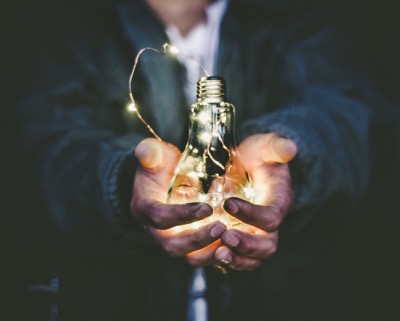 If a trader is serious about making this work, there is typically only one way and the following principles describe the “new” mindset:

The trader now starts to realize what trading is all about. Although trading is still not easy and his results are far from being perfect, he understands the importance of process-oriented thinking. He stops focusing on only the outcome of his trades.

Most traders want consistent results before they apply constant actions which is impossible. First you need a consistent approach, a solid routine without much deviation and then you will have consistent results. Of course, those results won’t be too impressive at first and it’s likely that you will keep losing for a while, but at least you have something that you can work with. When your actions and results are all over the place, it’s impossible to identify specific things and work on them.

Traders at this stage are typically break-even traders and slowly start to turn their equity graph up. Discipline, emotions and adequate risk management are of utmost importance at this stage and a long-term approach will keep the trader from falling back into old habits.

The trading journal becomes his most important companion at this stage because it provides an objective look at his performance and behavior.

This is when trading becomes boring – and trading should be (somewhat) boring! At this stage, the trader has spent years of looking at screens and taking the same setups hundreds or even thousands of times. He knows exactly how his preferred setup looks like and trading becomes a waiting game.

At this stage, the trader has fully internalized that he can’t win every trade and, more importantly, he does not really care about losses as long as he has followed his rules. Trading is now an activity of pattern recognition, risk management and constant self-improvement. 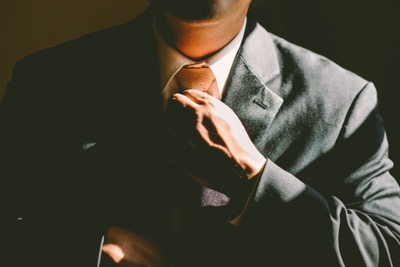 The unconscious competent trader has a thirst for self-improvement and constantly studies the markets. He evaluates the effectiveness of his method. His trading journal is now the most solid foundation of his money making business. He can turn to it whenever the markets throw a curveball at him.

Which stage are you at right now?

Being a trader is a life-long journey of self-improvement and self-discovery. The markets teach you something about yourself every day. In fact, a trading plan that makes money for a trader is simply the extension of his own personality with all its qualities and imperfections.

Your task right now, if you are not a consistently profitable trader yet, is to sit down and take a deep look at yourself. Then try to answer the following question: which stage are you at right now?

You are stuck with your trading!? Take a look at our 12 week program where we help you discover what is holding you back and keeping you from moving to the next stage. 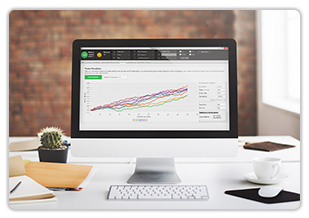 Join hundreds of other traders and join our trader development course